The Ivy group of companies has more than two decades of experience in investments, asset management and financial services. Ivy Private Equity, through customised and tailored solutions, brings disruptive financial engineering to transform your enterprise.

Ivy Private Equity focuses on three exciting, synergistic sectors, each of which promises sustained and attractive growth in the coming decade(s):

The Ivy team has a meaningful knowledge base of enterprise efficiency solutions,  merged with empowerment credentials. The team offers value-added private equity solutions to the agri-processing sector contributing to South Africa’s transformation goals.

In the cutting-edge world of technology and biosciences, Ivy partners with skills in the biotechnology field to seek out unique opportunities in this high growth market. Having access to both global and local skills gives the team access to some of the best opportunities in the industry.
‍
Cross-pollination between Ivy’s investments within each pillar and across the three pillars renders a unique and unmatchable complementarity that will provide additional growth prospects, over and above standalone business that is not part of the Ivy network.

Ivy Private Equity (Pty) Limited is a level one BBBEE contributor and an associate company of Ivy Asset Management. The private equity team seeks out excellent private companies where Ivy can offer its capital, skills and empowerment network to facilitate an acceleration of their business model, and strengthening of their valuations through sustainable annuity income and increased competitiveness in new and profitable complementary markets.
‍
This effective team has been carefully constituted to ensure it has the requisite skills in-house to support the value generation model required for the fund’s investments. Additional capacity is drawn from a network of specialist advisors and the fund’s Investments’ network when necessary. 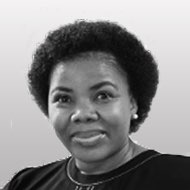 Chairperson of the Investment Committee (Co-Founder)

Noxolo was part of the team who established Energy House ZA (a 100% black women-owned company) with a presence across the African continent. Her main focus being  in energy generation and distribution; construction of green housing and infrastructure and the development and management of electricity generating plants. The key driver being  clean energy which utilises solar, biomass, and fuel cell technologies.

Noxolo is a board member and chairperson of HR committee at City Power in the City of Joburg municipality. She is also currently focusing on economic development consulting for Scatec and Woolworths as well as investor relations management between South Africa and Nigeria for Energy House ZA. Noxolo is the Chairperson of the Females in Energy Management SA as well as an exco member of SANEA (South African National Energy Association). Her previous roles and experiences include being the Head of Sustainability and Economic Development for Cennergi (Pty) Ltd, Sustainability manager for British American Tobacco (BATSA) in Stellenbosch, as well as fixed consulting roles for Wits University, Shanduka group, BHP Billiton, Trialogue, SCORE and the Youth Development Trust.

Ross completed his articles with Deloitte in Johannesburg. He spent 2 years in financial services in London before joining Simpson Mckie in their corporate finance team in Johannesburg, focusing on capital raising and mining transactions. In 1999 Ross joined Standard Bank’s private equity division. He became joint head of private equity in 2007, a position he retained until he left Standard Bank in 2014.

Responsibilities included chairing the weekly team investment meetings, which included updates on underlying investments and pipeline opportunities, presenting the quarterly valuations to the investment committee, marketing the division within the bank and externally, managing a team of 10 professionals. Since leaving Standard Bank, Ross has invested in a number of private companies where he provides strategic advice and assist in the growth of these businesses through his past experiences in private equity. He also co-founded a business focusing on renewable energy recognition for businesses.

Ross is a founder of Ivy Private Equity with the goal to create a compelling investment vehicle while creating a company focussed on empowering and advancing the South African economy.

Brian joins Ivy Private Equity after 17 years at SABMiller / ABInBev. As Global Director of Engineering and Capital Projects for SABMiller plc. Brian was instrumental in driving more than R 2,2 Billion in annual global cost savings through water, energy and emissions reduction, as well as tens of millions of dollars in Capital Project Value Engineering - in so doing achieving the first public domain corporate sustainability targets years ahead of schedule.

Whilst Brian was the Head of Strategy for South Africa Breweries Ltd, it became the most profitable operating beer company versus known worldwide competitor margins. Prior to SABMiller, Brian worked at Honeywell, ICI Tioxide, and Unilever in permanent positions and projects throughout the UK, France, Portugal, and his home country South Africa.

Brian is a founder of Ivy Private Equity with the goal to create a compelling investment vehicle while creating a company focussed on empowering and advancing the South African economy.
Brian is a Chemical Engineer (UCT) and holds an MBA from INSEAD (France).

Khetiwe serves on the Ivy Private Equity investment advisory committee. With significant experience in the private equity field she is an invaluable member of the investment team.

Khetiwe's financial services professional career has been comprised of management roles in the corporate finance, private equity and corporate credit divisions of leading pan-African investment banking institutions. Khetiwe has also served in macro and developmental economics while playing active roles in operational and investment committee  at the Central Bank of Swaziland and the National Empowerment Fund and the KZN Growth Fund.

Khetiwe has an entrepreneurial background, and co-founded and acted as the operational director of CNDB (SA)(Pty) Ltd, a bulk consumer goods export distribution business. Over 15 years Khetiwe has gained professional and operational experience and exposure across many African markets.

Khetiwe completed a Bachelors Degree in Commerce (University of the Witwatersrand) and a Masters Degree in International Finance and Business (Columbia University (NY)).

Munie has worked in the financial services industry for the past three decades. Her role at Ivy Private Equity is to support the management team with general administration and compliance facilitation.

Munie’s career began at First National Bank working in various capacities and departments. A move to the Unilever Pension Fund in the investment side grew her knowledge of the complexities of the financial services industry. This led to a move into the Stockbroking environment assisting institutional firms in different divisions, climbing the corporate ladder in various managerial roles.

Bruce gained his initial market experience while working for Societe Generale bank as an equity trader, developing his private client portfolio management skills. In 1998 he founded Ivy Asset Management to offer clients a transparent platform for their investment needs.

With over a two decades of trading and portfolio management experience, Bruce has become a regular market commentator on SAFM, SABC, Classic FM, Summit TV, and CNBC. He serves on the Ivy Asset Management Board and is designated as a Key Individual by the FSB.

Bruce is a founder of Ivy Private Equity with the goal to create a compelling investment vehicle while creating a company focussed on empowering and advancing the South African economy.